Soccer Added to The Depot Mix

With the return of minor league baseball to Cleburne just three months away comes news that FC Cleburne, a minor league soccer team, will also debut this year.

Both will play at The Depot.

The Premiere Development League announced the new team on Thursday in addition to Texas United, which will play in Grand Prairie.

The two clubs, both owned and operated by Neltex Sports Group, will join the Southern Conference.

Plans are underway to bring the Cleburne Railroaders, a minor league baseball team that folded in 1911, back in May. Robbie Fenyes serves as president of both the Railroaders and Neltex Sports Group. The revived Railroaders recently joined the American Association of Independent Professional Baseball.

“We are thrilled to have the Neltex Sports Group join the Premier Development League as owners because they know how to run an effective franchise and will provide college-aged players in the area a great opportunity to improve their game on their path to the professional ranks,” PDL Director Todd Eason said. “The PDL made it a priority to bring high-performing ownership groups into the league for 2017 and beyond, and Texas United’s and FC Cleburne’s ownership group is a strong addition to the league.”

FC Cleburne will play their home games at The Depot while Texas United will play at AirHogs Stadium.

“Using sports as a platform to affect lives and communities is a true passion of ours,” Neltex Sports Group CEO Christie Nelson said. “We are excited to join the PDL and further our initiatives through soccer in Grand Prairie and Cleburne.”

The Premier Development League, a part of the United Soccer Leagues, which also operates the Division II United Soccer League and Super Y League, has functioned as a stepping-stone for aspiring players. Since 2010, nearly 70 percent of PDL alumni have been selected in Major League Soccer SuperDrafts, with a total of 59 being chosen in 2017.

More than 550 PDL alumni were a part of the 2016 USL and MLS regular seasons, including 2016 MLS Rookie of the Year Jordan Morris, 2016 MLS Defender of the Year Matt Hedges, 2016 USL MVP Sean Okoli and 2016 USL Rookie of the Year Brandon Allen. U.S. Men’s National Team members Brad Guzan, Darlington Nagbe, DeAndre Yedlin, Gyasi Zardes and Perry Kitchen are among the many professionals to have had PDL experience.

The Depot Named Best of the Ballparks 2017

The Building of the Cleburne Ballpark

A Baseball Game Honoring Those Who Served

The Depot Named ‘Best of the Best’

The Depot Named Best of the Ballparks 2017

Here's Your Chance to Work for the Cleburne Railroaders

Soccer Added to The Depot Mix

The Building of the Cleburne Ballpark 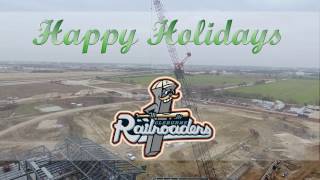